It’s a scary thought! We explain why and how we changed the five people we spend the most time with, by finding multi-millionaire mentors which made us better property investors and increased our wealth.
Join our mentoring programme: mycastleproperty.co.uk/mentoring

Welcome to the Sarah and George Choy Property Podcast.

The show that helps you to become financially free, so you can spend more time with your family, traveling and pursuing your passions.

Today we’re going to talk about why “You are the average of the five people you spend the most time with” — which is a quote by Jim Rohn.

And can be a scary thing to look at actually.

So what does this actually mean?

If you sit down and you work out who you spend the most hours with — say, I mean your partner is generally going to be an obvious one. Your kids probably don’t count, but sort of. Adults that you spend time with.

Sit down literally work it out.

Who do you spend most time with and what are they like? Who are yours?

Have they achieved the goal that you’re looking to achieve?

Because you’ll find that perhaps they haven’t!

Certainly we found that in the old days.
Yeah.

So, are you looking to become a Mllionaire?

Are you looking to become Financially Free?

They’re not necessarily the same thing.

We know plenty of Millionaires who are not Financially Free.

None of ours were at the time when we started looking into this exercise.

So it was really interesting to do.

They don’t want to hang out with people who are very different from them.

So there are two levels of people that you’re going to be able to spend time with.

So number one is your Peers and number two are Role Models.

So we’ll go into a bit more definition for those now.

Your Peers – they’re generally your your friends, your colleagues and family. So they’re the
people you’re spending your time with.

Now when we did this exercise we found that — apart from each other — obviously and we’re planning on spending
time together because we’re happily married; none of the people we were hanging out with really had achieved what we wanted to achieve.

And they didn’t necessarily have the right mindset to achieve what we needed to achieve.

And we gradually spent more time with them. And hanging out with more property people, because we had very few. Exactly we didn’t really know any at the time.

So we we sought people out specifically and built relationships with people and spent more time with those people.

Another thing to say is, if you’ve got really negative people in your close social circle — and you know, quite often you do — sometimes you’re related to them. Sometimes they’re your best friends, or your close friends at school, say.

If they’re really negative and they’re just dragging you down all the time, spend less time with them.

Not “no time” necessarily — particularly if you’re close to them. But less. The less time you can spend with people
who have got a really negative mindset the better. Because you want to be having a positive mindset.

And particularly avoid those that are really bad with money.  Because you don’t want to be like that. You don’t want their habits. No.

And these days we spend a lot of our social time actually just in Masterminds — ones we’ve designed ourselves and ones
we’ve joined specifically to spend time with people who are doing what we want to be doing, or have done what we want to do.

Because you know – you become like the people you’re with.

That’s that’s the whole thing behind it — these five people that you hang out with.
You gradually change to be like them.

Say all your friends are very bad with money. Or all of your friends eat a lot of cake, say. You will become like them,
rather than becoming like the people that you want to be.

So you want to find an aspirational group — so you can change positively rather than negatively.

So let’s talk about Role Models.

There are two things to think about with role models.

1. First of all, have they achieved the
goal that you want?

So that’s important, you know. So don’t just pick someone that’s just doing things in in the industry that you want. Choose someone who’s achieved the end result. So that’s really important.

Because if you if you don’t think you’re going to get on with these people, then it just doesn’t matter whether they’ve achieved
the goal or not.

So look for role models that have similar values to you so, that you know you can connect with them emotionally.

There’s a great quote from Tony Robbins which is: “Proximity is power.”

That means that the closer you can get to them, ideally physically…but not stalking! But not so much at the moment.

The closer you can get to them then the better. You know, the more influence they can have on you. The more impact they can have.

But you know, these people who are at higher levels — the Role Models — they are difficult to get access to because they’re busy people.

Their time, their time is is limited, or I should say “valuable.”

That that’s usually the number one thing for them — time. And they don’t want to spend their
time…

Quite often — and this happens to us. You get loads of people, every day saying:
“Oh can you give me a call,” “Just, you know, chat with me for half an hour, or an hour, or whatever for free.”

And you know, if you accepted every request, that would create an entire full-time job for free. Doing one-to-ones all the time— when you should be out there making money. That’s what you should be doing — that’s much more valuable.

So, whatever you do, don’t start contacting higher people and ask them for free one-to-ones. Just don’t do that.

I know people that have accidentally posted their phone number, and then they’ve had to pay for an answering service. A virtual
assistant to answer all their calls, so they can get rid of everybody.

So, it then makes your phone completely pointless. You then don’t have a phone. You can’t use it anymore.

You can’t call up your family because there’s there’s people trying to call it all the time. So be respectful of that.

So you know I have the phone numbers of people much higher than me in my contacts. And people that are close to becoming
billionaires. And I don’t phone them all the time, because I respect their time. I know their time is very precious.

So if I ever get to speak to them, you I’m very honoured and I feel very privileged that I’ve had a call with them.

And you know — “Success leaves clues.”

That’s another quote from Tony Robbins.

So, what what does that mean? What it means is that if you can see successful people and watch what what they do and how
they think, then those are the clues as to how they achieved the success in the first place.

So what you can always think of: What would so-and-so do.

So you can have that have that going through mind, when you’re making a decision. What would they do if they were in the room with me?

What do you think they would say? You can start thinking like that.

Now how do you get into their mind?

There are different ways:

– You read their books.

– You can watch their vlogs like this one, or podcasts.

– YouTube is so amazing. A lot of people make so much content for free and you can you can absorb so much information that way. We do ourselves. So that can be a great way to understand their thinking.

– You can join their groups. We have a Facebook group – the Sarah and George Choy Community — so you can you can join that. Interact with people there. They will be people interested in property and financial freedom. We’re also on there, so we, we often comment on posts.

– Another way to get closer to them is if you were running an event. A live event, or virtual life event. You can invite them as a keynote speaker.

– So that’s one way to suddenly build up a relationship with them. Because you’re giving back then. It’s a win-win. You’re giving them a platform to communicate their knowledge and message.

– Another one could be if you had an established vlog or podcast. So I’m not talking about just recording a video with them. But if you had an “established” one and you invited that person to it, again that’s another way you can build a relationship with that person.

– Do they do any property courses? You can take those courses. It compresses decades into days. You can talk to them. Don’t don’t do somebody’s course and then just sit at the back of the room and then sneak out at the end.  Chat in the breaks. Be there.

Have a conversation. Try and help them, and that way you can build a relationship without them feeling that you’re pressuring them, or wasting their time.

– Or if their course is not live, then quite often there’s a private group that only the people on the course go to. That’s another way to interact with them there. They’ll pay a lot more attention, because you’ve taken their course.

Because a really high level person’s not often going to be in their general Facebook group, because they’re too busy. But if you’ve got kind of a more elite type group you can get into — even if you have to pay to get into it, you can get better access to people that way.

– Taking things a step further is joining a mentoring or mastermind — and masterminds are basically group mentoring.

We pay to go into masterminds ourselves. Because there’s always more to learn. We pay for courses as well. There’s always another level to go to. You know, it never stops.

There was some great feedback we received from one of our mentees Claire. She told us that that we said to her:

“We’re millionaires and you will be too.”

It was just a throwaway comment, you know. It wasn’t you know, part of the part of the agenda, but it’s just something that we believe. And she said to us that, we were saying it sincerely. That we weren’t making fun of her. That we meant it.

She said that she’d wanted to become wealthy, but she’d never considered that she could ever become a millionaire.

And she said at that point it hit her — that someone believed in her and it could be done. And that’s, that’s
quite an incredible thing.

So she told us this story. We didn’t think anything of it at the time. We were just being ourselves.

But anyway. So those are those are some of the tips to improve the average of the five people you spend the most time with.

We do have our own property and financial freedom mentoring program

Hopefully that has helped you to think about who the people you hang around with and how can shape your future.

And yes, you can do it, just bit by bit. It doesn’t have to be all at once.

Please Subscribe. Yes. Get new exciting videos and we will speak to you next week. 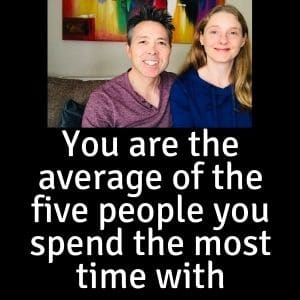